The British Summer is a time to celebrate, and one of the key events on the regal calendar is Trooping the Colour, a time for pageantry, parade, and pomp of the very highest order. The Queen’s personal troops and guards gather to pay homage to Her Majesty to celebrate her birthday, and they dress in their finest ceremonial uniform for this honour.

Regimental colours have been trooped in front of soldiers since the 17th Century, and the tradition of Trooping is to honour the sovereign’s official birthday, which can be traced back to the reign of King George 3rd in 1760.

AW Hainsworth are in fact the only woollen mill trusted to create the beautiful scarlet wool fabric used to make the iconic uniform of the Royal Grenadier Guards, worn by Prince William on his wedding day and out in full force on this special occasion. With over 1,000 uniformed officers taking part, the cloth woven for the regiment has to be of the very highest specification, and our commitment to quality at every part of the production, colouring and finishing process, all undertaken at our premium vertical woollen mill in Pudsey, Yorkshire, ensures consistency. 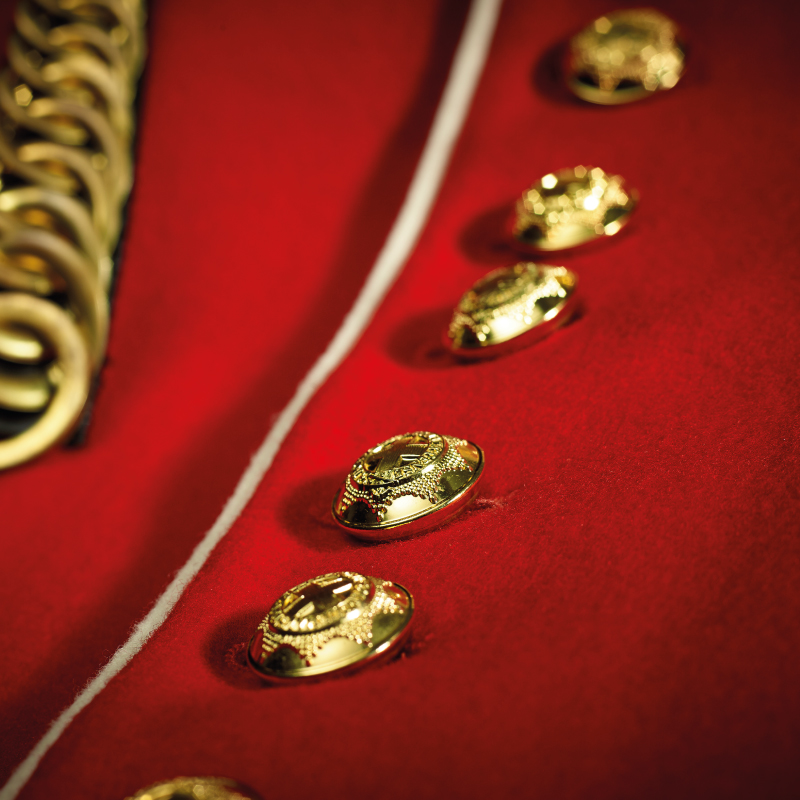 In addition to the Scarlet cloth, which is worn by the Royal Guards, Chelsea Pensioners, and the ceremonial uniforms worn by the Royal Family for state occasions, we also supply the navy fabric used for the trousers and the grey fabric for the greatcoats which the queen’s guards wear during the winter months.

Additionally we proudly produce the cloth for military uniforms worn by “The Boys in Blue”. When the Air force separated from the Army in 1918, the RAF approached AW Hainsworth in order to create their own identity, and today many air forces around the Commonwealth have adopted the same RAF Blue colours for their uniforms. Hainsworth also remain the sole inventors and producers for the Khaki Serge; the renowned Khaki cloth worn by military personnel across the globe.

Fashion brands also turn to us for sustainable, beautiful fabric of the very highest quality. British designers from Sara Madderson, previously worn by the Duchess of Cambridge, Christopher Raeburn and Phoebe English have all used Hainsworth cloth in their collections, whilst some of the top design houses also commission our soft, lustrous fabrics to create legacy pieces that look and feel ultra-modern but will last a lifetime.

Hainsworth employs over 180 people at the mill in West Yorkshire, many of whom have been with the business for years. Generations of families have been employed here, and it’s one of the only remaining woollen mills in the UK to operate a vertical operation, taking raw wool from its virgin status and managing the whole process from blending, spinning, weaving to dyeing and finishing.

Trooping the Colour takes place this Saturday 8th June, with the Queen and other key members of the Royal family in attendance.